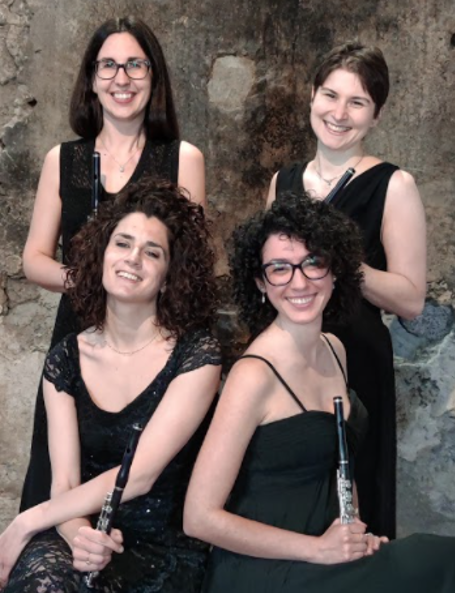 Alt(r)e Frequenze (the name, a play on words in the Italian language: Other/High Frequencies), is a piccolo quartet whose members are Daniela Vilasi, Fosca Briante, Anna Govetto and Alessandra Aitini. The group was founded in 2015 during the Master course in piccolo for solo and orchestral performance, which was held at the “G. Verdi” Conservatory in Milan, Italy by Maestro Nicola Mazzanti.
The quartet’s founding idea is to highlight the soloistic and chamber music aspects and value of piccolo; the research in sound – a deep sound, with endless nuances – and the development of the expressive skills of piccolo represent the fil rouge of Alt(r)e Frequenze’s activity.
The two main goals of Alt(r)e Frequenze are, on one side, to create a new repertoire for this group, and on the other side the re-interpretation of existing pieces under new light and colours. Contemporary renowned composers like F. De Rossi Re, U. Bombardelli, G.C. Taccani, U. Pedraglio have written new pieces for piccolo quartet.
In September 2015 the quartet Alt(r)e Frequenze won the Jury’s special prize in the Chamber Music category at the “S. Gazzelloni” international competition (Roccasecca, Italy), earning recognition from important personalities in the flute world.
In 2016 the quartet has been invited to Trame Sonore – the Chamber music festival in Mantova, Italy, to the Galway flute Festival (Weggis, Switzerland) and to the 2016 NFA (National Flute Association) convention in San Diego (California, U.S.A.), where three compositions written especially for this group will have their world premiere.
In October 2018 Alt(r)e Frequenze won the Jury’s special prize in the Chamber Music category at the “F. Cilea” international competition (Palmi, Reggio Calabria – Italy) and in May 2019 has been invited to “Como Contemporary Festival”.
At the end 2021 Alt(r)e Frequenze will publish its debut CD (Napi Records), dedicated to the 12 Telemann Fantasies for solo flute, arranged for four flutes/piccolos by Luca Russo in cooperation with the quartet itself.