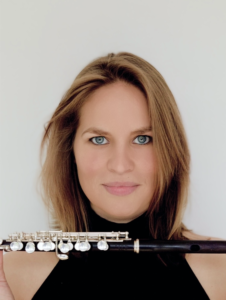 Simone Bodoky-van der Velde is Principal Piccolo of the Staatskapelle Berlin, a position that she has held since 2007. With the orchestra she has performed with Daniel Barenboim, Kirill Petrenko, Pierre Boulez, Zubin Mehta, Christian Thielemann, Simon Rattle, Andris Nelsons and Gustavo Dudamel.

She has also performed as a member of the orchestra of the Bayreuther Festspiele and has played as a guest with the Berlin Philharmonic, Staatskapelle Dresden and the Deutsche Symphonie Orchester.

Simone started playing the flute at the age of 7. She studied first at the Maastricht Conservatory with Peter Rijkx and later in Frankfurt am Main with Thaddeus Watson and Sebastian Wittiber.

Pamela Stahel grew up in a musical family in the USA. Beginning with violin lessons at the age of five, she later discovered the flute and went on the earn a BM in music performance with Bernard Z.Goldberg. Studies with William Hebert and Masterclasses with Marcel Moyse and Julius Baker furthered her education. Her first orchestral experience included engagements with various American orchestras such as the Pittsburgh Symphony Orchestra, Canton & Akron Symphonies & the Fort Wayne Philharmonic. After relocating in Switzerland, Ms. Stahel intensified her studies with André Jaunet while becoming an active freelancer. Invitations to guest with ensembles such as the Tonhalle Orchestra, Zurich Chamber Orchestra and Lucerne Symphony Orchestra followed.

Her engagement with the Philharmonia Zurich; Zurich Opera Orchestra, began in 1991. She has the pleasure to have worked with conductors such as Gianandrea Noseda, Fabio Luisi, Zubin Mehta & Franz-Welser Möst, among others.

A passionate chamber musician, she performs regularly with several ensembles in projects involving premieres of contemporary and crossover works.

Devoted to furthering young musicians; she previously taught at the Lucerne Conservatory and presently conducts a piccolo and chamber music class at the Zurich University of the Arts.

She has been invited to perform at the NFA Flute Convention, USA as well as at various festivals such as the Rheinau Summer Academy in Switzerland, Porto Flute Festival & the International Piccolo Festival in Grado, Italy. 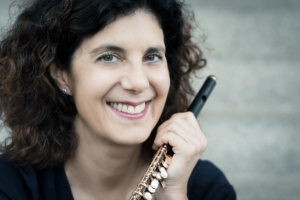 The American Flutist Thaddeus Watson, piccolist of many years with the Frankfurt Radio Symphony, studied with Walfrid Kujala in Chicago, Aurèle Nicolet in Freiburg im Breisgau and James Galway in Luzern. In addition he visited master classes with Marcel Moyse in Boswil.

Watson has been active as soloist and chamber musician with concerts throughout the world, and has been espescially active in music oft the avante-garde. He has performed as soloist in the Zabgreb Triennial and the Budapest Spring festivals. He is a member of the „World Orchestra for Peace“ (Sir Georg Solti founder – Valery Gergeiev conductor), the Bayreuth Festival Orchestra, and as piccolist has a long year relationship with the Chamber Orchestra of Europe. CD Recordings for Neos, Mode Records and Da Camera Magna.